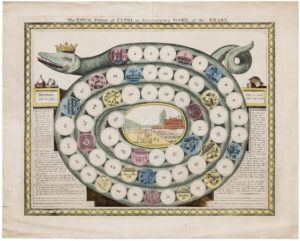 Hyperallergic has an interesting article on 19th Century British board games. The games were designed

thematically to illustrate several trends. Some games were for pure entertainment, while others aimed to more deeply engage the minds of their young participants. There were games that dictated moral values as players advanced along paths towards virtues or vices; games designed around geography and British history; and instructive games, requiring players to memorize facts on subjects from math to astronomy.

Publishers deliberately merged education and entertainment: they shrewdly realized that such games would appeal to parents.

It makes me wonder how people will interpret our games 150 years from now.