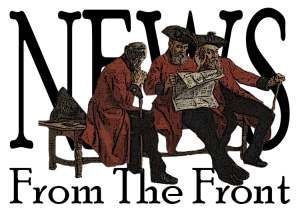 The fantasy of turning any surface into a proper gaming table has haunted game players for decades, with many trying and few succeeding to fill that niche in the marketplace. Enter: Gaddis Gaming and the much-improved version 2.0 of its much talked-about TableTopper.

First we should note that the TableTopper is not a table, we assume you already own one. It is a topper – lightweight and portable – that can easily turn your unsatisfactory table into a gaming surface that is just the right size for any game you are playing. It’s expandable and retractable, so one purchase allows you the versatility of a 4’x4’ or 4’x6’ play area. It’s modular, making it easy to transport and store or to increase the length to 8’ or 10’, if you are so inclined. And it is customizable with an assortment of colors and finishes, logos and designs to decorate the sturdy Out-Of-Play areas.

The best news of all is that the Gaddis Gaming TableTopper is currently available on Kickstarter at a special low price. Check it out: https://www.kickstarter.com/projects/1834692986/gaddis-gaming-tabletoppertm

My name is Manoel Garcia and I am founder of Voxelhouse, a game/art studio. For years I had the opportunity to play several well-known titles (the list is huge) to amuse myself enough. I also had the influence of big electronic titles, and then I started to develop a system of my own for a few years now.

“One more system …” you are thinking this way, I say this because it is what pops my head right now. There are so many systems today in the market, right? Lots of commercial and lots of free stuff that you get lost in so many options. But anyway I decided to launch the system because I have some things in my head that I would like to share with everyone. It is the desire of the creator of anything to expose the public to their work and so I decided to do this.

Scavengers is a game that passes in a world different from ours, with a mixture of magic, steampunk, and lots of history. I did not mention it, but I love writing, and during this time I designed the system, I wrote a lot of lore that I intend to put together with the game, My native language is not English but Portuguese (I was born in Portugal) and I’m translating / Locating all this material for English.

The game was designed thinking in skirmishes combats, small groups of warriors who are fighting each other in pursuit of a larger goal. I have added to this some characteristics that I will present here:

– System based on 6-sided dices;
– Live system, constantly expanding and with rules entry and new game supplements
– 1/100 scale (15mm can be used as well)
– 3D print miniatures available for free
– Movement system using tape measure or hexes grid
– Action cards to increase the aspects of gameplay
– Simple rules that allow the novice player to enter in an easy way in the game and advanced rules system for the more experienced.
– 2 initial factions: humans and orcs

The game is being released with two initial booklets

– Core rules, the basic rules of the game that cover the primary aspects of gameplay
– Encyclopedia Belicosa – Official Magazine with supplementary information that will contain: additional rules, game factions, stories and a whole series of information for the player Belicosa will be launched regularly as if it were “a magazine” for the game. (By the way, we will accept collaborations)

One point I did not mention is that the game is free, you can download, distribute and play (but you can not sell it!). My wish is that one day, release a printed deluxe version. (If the players like the game, who knows?)

Plans exist and many, but what would come after this first moment? It depends a lot on what the community will do and say. Some points that are already underway:

In this moment I´m releasing the “number 0” of Encyclopedia Belicosa I invite everyone to download our magazine on: and I am waiting for your feedback and participation.

The rules will be available next July, 11 for download and if you need to get more informations, drop an email for mgleitef@gmail.com or our twitter page https://twitter.com/voxelminis. Our new home page are on the way, and soon our download link will be available.

I have absolutely no connection to this Kickstarter, and no idea how the gameplay works, but I love the retro-80s artwork. Feeling a little bit nostalgic.

Clicking on the “K” in the upper left hand corner of the video takes you to the campaign.

The first ever introduction to the new Three6 Engine written for a bright and brilliantly realized science fantasy world by legendary game designer Ray Machuga.”

They were the first American unit to go into battle in WWI, earning universal renown for their fighting spirit and for never giving up an inch of ground, or losing a man to capture. They were the Harlem HellFighters — first African American regiment to serve with the American Expeditionary Forces during World War I. To commemorate the 100th Anniversary of the Great War, and to acknowledge these courageous and long-neglected men who paved the way for future black soldiers, game developer Gaddis Gaming is launching a KickStarter campaign seeking support from gamers to bring their new “Shattered Crown” skirmish game to market.

“Shattered Crown” is the first WWI game to combine history, science fiction and fantasy with a complete line of 28mm miniatures — including the Allies, Germans, Japanese, Russians — putting it on the frontline of gaming’s “Weird” genre while transporting gamers to a thrilling battlefield. The world of “Shattered Crown” definitely delivers the Weird, re-imagining history to set the game just after Earth’s victory over the Martian invasion, with the different factions now finding themselves — wonderfully weirdly — on the eve of WWI.